Dock10 studios at MediaCityUK, Salford was the venue for the first televised head-to-head debate between Jeremy Hunt and Boris Johnson: the two candidates vying to become our next Prime Minister.

We were asked to design the logo and animate a short title sequence for this one-off debate, as well as a full kit of graphics for the live transmission. Striking a balance between seriousness and entertainment was key, all the while maintaining ITV’s core branding. We offset the conservative blue colours with a hint of gold, introducing a glass environment within which we embedded the iconic ‘Number 10’. 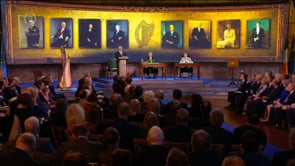 House of the Oireachtas